Dwarfed by a sign more impressive than the company's real contribution to the war effort, this Loughead-built HS-2L is seen here on the beach at Santa Barbara.

Having survived two crashes in Curtiss Pushers within nine months, Allan Loughead was not very keen on having a relatively heavy engine mounted aft of the pilot. Thus, while working as an instructor and exhibition pilot for the International Aircraft Manufacturing Company, he conceived a tractor biplane as the first aircraft to bear the Loughead name. Of fairly advanced concept for its day, the machine was completed as a floatplane in 1913 and, until 1918, when its builders dismantled it and sold its engine, it was a money-making venture for Allan and Malcolm Loughead. Of not many single contemporary aeroplanes could such a claim be justly made.
Even though Allan Loughead had begun to have some wooden parts milled while he was working in Chicago, most of the work remained to be done when in early 1912 he joined forces with his brother Malcolm in San Francisco. Renting space in a small frame garage at Pacific and Polk Streets on the waterfront, the brothers worked on the aircraft during evenings and week-ends. Finally, with the formation of the Alco Hydro-Aeroplane Company, they obtained sufficient funds to complete the work and acquire a six-cylinder Kirkham engine.
Of three-bay biplane design, with upper and lower wing spans of 46 and 36 ft (14-02 and 10-97 m) respectively, the aircraft had its ailerons mounted between the two wings, and cruciform tail surfaces hinged as a unit on a universal joint.* Beneath the forward fuselage was installed a sled-type pontoon, and cylindrical floats were attached beneath the lower wing. Accommodation was provided for a pilot and one, later two, passengers in tandem open cockpits located below and art of the top wing.
*) A three-in-one control arrangement was used, with the wheel operating the rudder, and the stick, to which the wheel was attached, operating the elevators and ailerons.
Designated Model G, to imply that it was their seventh design, the seaplane at the time of its completion was powered by a Kirkham six-cylinder engine with a distinctive horseshoe-shaped radiator. However, this powerplant was unreliable and after fifteen minutes of ground running time its crankcase split. The Lougheads returned the engine to Kirkham, in the unwarranted hope of obtaining a refund, and switched to an 80 hp Curtiss O V-8 engine. Initially they retained the horseshoe-shaped radiator for the Curtiss engine.
Launched onto San Francisco Bay from the slipway at the foot of Laguna Street, the Model G was flown by Allan Loughead on 15 June, 1913. After a brief flight he alighted to pick up Malcolm and together they flew for twenty minutes, cruising over the shores of the Golden Gate, over Alcatraz Island and back to the beach. A similar flight was made with R. L. Coleman as a passenger, but a fourth flight had to be cut short when stronger winds and choppy waters required prudence. Later during the summer of 1913 the Model G suffered minor damage, including a broken propeller and torn pontoon, when Allan Loughead hit a levee on alighting at San Mateo while taking Ferdinand Theriot on a charter flight. The seaplane was transported back to San Francisco where it was repaired and a conventional frontal radiator replaced the old Kirkham horseshoe unit. However, the Model G then remained in storage for some eighteen months while Malcolm Loughead went on wild adventures to China and Mexico.
Seeing in the Panama-Pacific Exposition an opportunity to recoup their investment, the Lougheads, with the help of capital provided by a Mr Meyer, bought the Model G from the other investors of the Alco Hydro-Aeroplane Company. Underbid by Bob Fowler for the passenger-flying concession at the Panama-Pacific Exposition, which opened in San Francisco in February 1915, the Loughead-Meyer partnership took over from Fowler when the latter's aeroplane was destroyed. In fifty days of flying they obtained a $4,000 profit from the $6,000 income realized by carrying 600 passengers on ten-minute joy rides.
Upon investing their profit in the Loughead Aircraft Manufacturing Company, which they organized at Santa Barbara with other investors, Allan and Malcolm Loughead had the Model G taken by flat-car to that community down the coast of California. There the Model G continued to earn income for its owners by flying joy rides and charters. It was even used to make the first air crossing of the Santa Barbara Channel, carrying two passengers sixty miles in one hour. Finally, in 1918 the Model G's wooden airframe and fabric covering were showing signs of age and the Lougheads realized a last income from their aircraft by selling its Curtiss engine.

The Model G at San Francisco. Note the shape of the main float and wingtip floats, location of ailerons between the wings, and cruciform tail.

The Model G floatplane taxi-ing back to a slip on San Francisco Bay.

The horseshoe-shaped Kirkham radiator as originally fitted to the Model G. 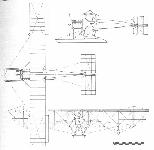 Undertaking the design and construction of a ten-seat, twin-engined flying-boat was a daring venture, whether for so small a firm as the newly organized Loughead Aircraft Manufacturing Company or for such an inexperienced designer as Allan Loughead then was. Nevertheless, after a two-year gestation the F-l (Flying-boat One) was first flown on 28 March, 1918, and soon made the then longest overwater flight when it was delivered to North Island, San Diego, for evaluation by the U S Navy. It then had a brief career after being modified to landplane configuration and then re-converted to a flying-boat.
Preliminary design work was undertaken in early 1916 by Allan Loughead, with some assistance from his brother Malcolm. In mid-summer of that year the Loughead brothers got additional design help when they hired a 21-year-old mechanic and architectural draughtsman, John K. Northrop. A self-taught engineer, Northrop began working on the wooden hull of the new flying-boat and soon demonstrated his creative talent. Accordingly, he took over responsibility for the design and stress analysis of the fabric-covered unequal span wings. The lower wing was attached to the fuselage nacelle, which had open accommodation for two pilots side by side and eight to ten passengers, and was linked to the high-mounted upper wing by steel interplane struts. Between the wings were attached the two 160 hp Hall-Scott liquid-cooled engines driving two-blade tractor propellers. The tail surfaces were carried by twin uncovered booms, with directional control being provided by two fins and three rudders, the central unit being all movable. There were side curtains between the fore and aft kingposts above the upper wing. The stabilizing wingtip floats were attached directly to the wing.
Construction of the F-1 - under the direction of Anthony 'Tony' Stadlman, a friend of Allan Loughead since their barnstorming days in Illinois - proceeded very slowly at first as the company was undercapitalized and understaffed. However, the United States' entry into the war in 1917 lent a new impetus to the project as the Loughead brothers were keen on selling their aircraft to the US Navy. Nevertheless, eleven more months elapsed until the F-1 was first launched on Santa Barbara Bay and Allan Loughead took it for its first flight on 28 March, 1918. Flight characteristics were found generally satisfactory, the only modification required being a reduction in the area of the ailerons which extended beyond the upper wingtips. Nevertheless, the rudders were heightened and provided with horn balances. Shortly after the F-1, carrying Allan and Malcolm Loughead, Carl Christofferson, and a newspaper man, was flown nonstop to San Diego covering the 211 miles (340 km) between Santa Barbara and North Island in 3 hr 1 min. The US Navy evaluation of the aircraft was generally favourable but by then that Service had already ordered large quantities of Curtiss HS-2Ls which, each powered by a single 330 hp Liberty engine, were lighter and slightly faster than the Loughead F-1. Consequently, the Navy did not buy the F-1 but, as a consolation prize, awarded Loughead Aircraft Manufacturing Company a contract for the construction of two HS-2Ls and another, cancelled at the end of the war, for the production of fifty single-seat naval scouts.
After the F-1 had been returned by the Navy in August 1918 the Loughead brothers decided to modify it to attract attention to their fledgling company. The original fuselage and hull were replaced by a streamlined nacelle, and a tricycle undercarriage was installed to convert the aircraft into the long-range F-1A landplane. To reduce drag further, Jack Northrop devised streamlined wooden fairings for the steel interplane struts. In this form the aircraft was readied in late November 1918 to attempt a U S transcontinental flight. As at that time of the year the weather was not favourable over the most direct route, the crew - pilots O. S. T. 'Swede' Meyerhoffer and A. R. 'Bob' Ferneau, and mechanic L . G. Flint - chose a more southern route skirting the Mexican border. On the first leg of the transcontinental trip they nevertheless ran into bad weather and strong headwinds and, after covering 415 miles (688 km) in 6 hr 10 min, the aircraft was forced down at Tacna, Arizona, with a broken valve spring. After a fast repair the F-1A continued to Gila Bend, Arizona, where it was refuelled. On take-off from Gila Bend, a propeller hit a mesquite bush and, after reaching an altitude of 50 ft (15 m), the F-1A came down on its nose. There was no alternative but to abandon the transcontinental attempt and ship the aircraft back to Santa Barbara for repairs.
In Santa Barbara the aircraft was rebuilt as a flying-boat to be used during the 1919 summer tourist season to offer joy rides at $5 per passenger. The F-1 proved so reliable in this job that in October 1919 the U S State Department chartered it for King Albert and Queen Elisabeth of Belgium. The royal couple and their entourage were flown by the Loughead brothers from Santa Barbara to Santa Cruz Island, off the coast of southern California, and their services earned for Allan and Malcolm the award of the Belgian Order of the Golden Crown. After this, the F-1 was again operated on commercial charters, specially for use in films for which the Loughead brothers charged $150 per flying hour and $50 an hour for standby time. The F-1 was also hired by a couple who wished to become the first to have their marriage ceremony performed aloft.
After earning a sizeable sum for the Loughead Aircraft Manufacturing Company, the F-1 was finally sold in 1920 to provide cash to cover the cost of the S-1 sports biplane. Its new owners planned to use it for an air service to their resort and amusement centre on Catalina Island. This plan, however, never materialized and the F-1 finally succumbed to vandalism on the beach at Santa Barbara.

The Model F-1 which was completed at Santa Barbara in March 1918.

The Loughead F-1 in its original form.

Destined to remain in prototype form, the F-1 flying-boat was an excellent but ambitious design for a fledgling company.

In its landplane version the Loughead twin-engined aircraft had a short life.

The Loughead brothers in the cockpit of their F-1 flying-boat; Malcolm is in the starboard seat and Allan in the port. 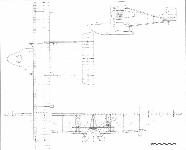