The Snipe was ordered in large numbers', including an initial 400 from Boulton & Paul, which must have been a bitter pill for John North to swallow. The other two Bobolink prototypes, C8656 and C8657 were cancelled on 9 April, though the fact that the serials were not re-issued may indicate that the construction of these two aircraft was well advanced.
The sole Bobolink was delivered to RNAS Hendon on 18 June for assessment as a shipboard fighter, though it was sent to Norwich the following day, for three days, possibly for modifications. It returned to Hendon on the 21st, and then returned to Norwich on 22 July, where presumably it ended its days.

The first Boulton & Paul design to be built, the sole P.3 Bobolink on roll-out at Riverside, with the front fuselage still uncovered.

The P.3 Bobolink when first rolled out at Riverside in December 1917, with Lewis gun fitted to the upper wing

The Bobolink at Mousehold on 19 February, 1918, with different propeller, no Lewis gun, but still with ailerons on upper wing only.

The Bobolink at Mousehold in June 1918. This is the only known picture of it fitted with horn-balanced rudder and cable-connected ailerons.

The Bobolink, at Martlesham Heath, fitted with strut-connected ailerons on lower wings.

Bourges F2903, as first flown with Bentley B.R.2 rotaries in lieu of ABC Dragonflies, and designated Mk 1B in this form.
This interesting machine was just going into production when the Armistice came. It is a three-seater and can be used for a variety of War purposes, while in a somewhat altered form it has great possibilities as a peace-time aeroplane. In the photograph the machine is fitted with two B.R. 2 rotary engines, but later types are driven by two A.B.C. "Dragonfly" engines. The performance of the Bourges is excellent, and she is particularly easy on the controls, being in fact capable of evolutions which have hitherto been considered chiefly the domain of smaller machines.

The P.6 Bourges Mk IIA F2903 in its original form, with the interim Bentley B.R.2 engines. The suffix 'A' denotes the straight-through upper wing.

Bourges F2903 at Mousehold with newly fitted horn-balanced ailerons. This machine, which is fitted with two A.B.C. "Dragonfly" engines, and the way it was handled by its pilot, Lieut. Courtney, was greatly admired at Hendon.

Bourges F2903 with engines at mid-gap.

A close up of the ABC Dragonfly installation on Bourges F2903.

A Napier Lion under test at Mousehold. The Lion was fitted to both the third Bourges, F2905, and the P.8 Atlantic.

The second P.7 Bourges. after crashing at Mousehold in 1919. The wreckage was used to build the second P.8.

F2904 after its crash at Mousehold. The wreckage was rebuilt as the second P.8 Atlantic. 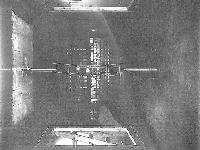 A model of the P. 7 Bourges in the Boulton & Paul wind-tunnel.

Immediately after the Bobolink was cancelled Boulton & Paul's design department began work on a full-scale experimental aircraft, drawings for the wings for example being dated 14 April, 1918. Building such an aircraft was quite an unusual step at the time, given that most pioneering aircraft could be considered full-scale experimental machines, as their designers/builders did not really know if they would fly, or how well, until they tried. That John North should consider it, shows the meticulous way he intended to go about improving the company's design potential.
Because the Defence Regulations introduced in 1917 made it illegal to build an aircraft without official sanction, permission had to be obtained for construction of the P.6. It was registered in a special 'X' series reserved for such aircraft, and given the serial X.25, the last of this special series to be awarded.
The P.6 was a conventional wood and fabric two-seat biplane, the main purpose of which was to examine different aerofoil sections, as part of Boulton & Paul's basic systematic research programme. Having a full-size aircraft was useful for eliminating the errors of scale found in wind-tunnel data.
The wings were single-bay, unstaggered, and equal-span with a basic RAF 15 section. The chord was 5 ft and there was a relatively wide gap also of 5 ft compared with the span of only 25 ft, the forward cockpit being beneath the centre section of the upper wing. The wings were built of spruce spars and ribs, with a spruce leading edge, and an ash trailing edge. The 7 1/2 sq ft area ailerons were identical on upper and lower wings.
The fuselage contained a large number of Sopwith Camel parts, and was a similar box-section design, with slightly curved upper surface. The use of Camel parts was only to be expected as the company were still producing an average of 29 Camels a week. The engine cowling was metal, and left unpainted. The very rounded horn-balanced rudder was of 9 sq ft area compared with only 2 1/2 sq ft for the fixed fin.
The P.6 was powered by the RAF 1a air-cooled V-8 of 90 hp driving a four-blade propeller of 9 ft 3 in diameter. This gave it a speed of 103 mph at 1,000 ft and the 20,1 gal fuel tank gave an endurance of 2 hr 20 min.
The date of the P.6's first flight is unknown, but it is likely to have been late in 1918, the use of Camel parts suggesting construction of the P.6 before Camel production gave way to Snipe production in November. It is probable that Frank Courtney made the first flight, he certainly flew the aircraft on several occasions, and gave Mrs Dawson Paul her first flight in it in March 1919.
Whether interchangeable mainplanes were actually fitted to the aircraft at any time is not recorded, but considerable experimental data was collected from its operation. The P.6 was a handy light aircraft, apart from its experimental usefulness, and after the War was actually offered for sale for ?600, though the company built a slightly larger version, the P.9, as their main offering for the civil flying boom which they hoped would follow.
The P.6 was put to practical use as transport for the company's general sales manager, being registered K-120/G-EACJ on 20 May, 1919; though there is some doubt that the aircraft ever wore these markings, retaining its X.25 serial and RAF roundels in all surviving photographs. It was painted with the large letters Boulton & Paul Ltd, Sales Dept, on the fuselage sides in an early form of aerial advertising, and so became one of the first corporate aircraft, and is credited with making the first business flight, on 1 May, 1919, from Norwich to Bury St Edmunds.

John North (centre) with the P.6, at Mousehold, in original colour scheme.

Mrs Dawson Paul about to take her first ever flight, in the P.6.

The P.6 with Boulton & Paul Ltd painted on the fuselage, as used to make the first busmess flight in the United Kingdom, 1 May, 1919.

The sole P.6 in postwar guise, but still retaining its wartime special serial X 25. It was used as a company transport after its experimental flying.

The first P.8 Atlantic at Mousehold. 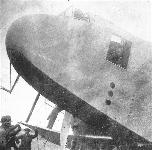 Frank Courtney, and Brown, his engineer, ready to make the first flight of the P.8 Atlantic, in April 1919.

Close up of the Napier Lion installation in the P.8.

The first P.8 Atlantic after crashing on take-off for its first flight.

The P.8 Atlantic after crashing on take off when an engine cut-out, killing all hopes Boulton & Paul had of making the first transatlantic flight.

J. D. North's design for the honour of being the first aeroplane to cross the North Atlantic nonstop - the second P.8 Atlantic, G-EAPE, at Mousehold.

The first P.8 Atlantic under construction, with the Bourges Mk 1B, being cannibalised in the background.

Mock-up of the airliner version of the Atlantic.

The P.10 on display at the Paris Salon d'Aeronautique in 1919, uncovered to show the all-metal structure.

The P.10 at Paris. The fuselage panels were of Bakelite-Dilecto.

The P.10 wing on loan from the Bridewell Museum, Norwich, at a Boulton Paul Society exhibition at the Aerospace Museum, Cosford, in 1993. This is the oldest British metal aircraft wing in existence.

The first P.9 at Mousehold. It was never registered in the United Kingdom or Australia.

The first P.9 under construction on 6 May, 1919, against an order from Lieut Long.

Lieut. Long (inset) and his P.9 ready to make the first aerial delivery of newspapers in the Commonwealth. from Elwick to Launceston. Tasmania.

Lieut Long and his P.9 on the occasion of the first aerial crossing of the Bass Strait on 17 December, 1919.

The use of the two inbuilt suitcases being demonstrated on P.9 G-EAPD.

One of the eight P.9s built, G-EAPD, was used mostly as a company transport until April 1920 when the registration was cancelled.

108 year-old Henry Moore being given his first flight in P.9 G-AUCP on 26 February, 1926. The suitcase installation can be seen behind the cockpit. 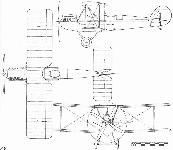 The first Felixstowe F.3 flying-boat hull under construction, showing the cross-hatched planking of the hull. 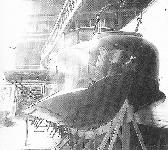 The method of transporting the Felixstowe hulls to Preston.

The Grahame-White Type 11 Aerobus designed by John Dudley North (4th from left), which set a world record, lifting 10 people including the pilot, Louis Noel, in 1913.

The first F.E.2b completed, 5201, Bombay No.1. First flown on 4 October 1915 and delivered to Farnborough by Howard Pixton on 8 October.
The two seat Royal Aircraft Factory FE 2b was designed as a fighter, reconnaissance and night bomber and was a 120hp, later 160hp Beardmore-engined development of the 1913 FE 2a. The first FE 2b flew initially during March 1915, the type entering operations two months later, with No 6 Squadron, RFC, based at Abeele. Initial delivery build-up was slow, with only 32 having been handed over by the end of 1915. Sadly, British pilots were to suffer badly at the hands of the Fokker Eindekkers thanks to this delay, as the FE 2B, along with the Airco DH 2, was to be pivotal in ending the Fokker scourge. Despite its poor top level speed of 91.5mph at sea level, the FE 2b's clear forward arcs of fire more than compensated. In all, 1,939 examples, including some converted FE 2a, were to be built.

The front fuselage of a Sopwith Camel under construction at Riverside.

Completed Snipes in the hangars at Mousehold. Production went on well into 1919.